The vibrant city of Meerut with its rich history and culture is famous for its unique, inexpensive and one-of-a-kind scissors. The scissor manufacturing industry has been thriving in Meerut since the 17th century. Locals say that a resident blacksmith by the name of Akhunji combined two swords to cut leather in 1645 during the Mughal period to create the first pair of scissors in India.

The artisans employed in this cottage industry have inherited the knowledge of making these extraordinary pieces from their ancestors. Scissors in Meerut are of three types and manufactured based on their functionality, composition of material used and size and weight. Kainchi Bazaar houses close to 600 units and employs approximately 70,000 craftsmen with every pair of scissors passing through almost 22 pairs of hands with each person being an expert in a different process like cutting, sharpening, welding, polishing and more. All the scissors with the exception of those fixed with a plastic handle undergo the processes of polishing, electroplating, nickeling, chroming and powder coating.

The unique characteristics of Meerut’s scissors are its strength, sharpness, sturdiness, smoothness and durability and the craftsmen attribute this to their meticulous handwork. The manual labour coupled with attention to detail makes the scale and quality of Meerut’s scissors far superior to the ordinary machine-made scissors. It is this that has made Meerut’s scissors popular with tailors and barbers across the country who are still using this precision tool for their handiwork.

There are a variety of Meerut scissors with each type suited to a purpose with specific blades, weights and lengths, either tapered or blunt tipped, matched to its use. The blades are made of material that is sourced from scrap salvaged from railway rolling stock and automobile industry of junk buses, cars and trucks.

A noteworthy specialty of these scissors is unlike most other scissors, these scissors can be repaired and reused many times. A popular idiom “Dada le, potaa barte” (bought by the grandfather and still used by grandson) floats in Meerut and stands as a testimony to its innovation, quality and durability. 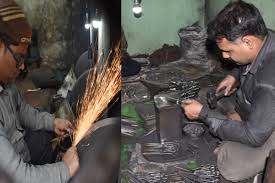 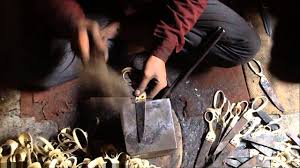 One thought on “Meerut Scissors”