In the 1940s, Ponnambala Nadar, a resourceful grocery store owner decided to use sugarcane jaggery (gur) and peanuts to make the kadalai mittai shifting from the traditional preparation of Kovilpatti Kadalai Mittai using palm jaggery and groundnuts locally available in nearby districts. Locals say that for decades Kovilpatti kadalai mittai was prepared during village festivals in the age-old method. Ponnambala Nadar also changed the shape of the kadalai mittai from the traditional balls to the rectangular shapes by cutting the peanut mixture prepared.

Kadalai mittai from Kovilpatti is legendary dating back at least 100 years. The groundnuts are sourced with utmost care from the nearby town of Aruppukottai. The groundnuts are grown in the native black soil in and around Kovilpatti. The jaggery (organic jaggery) is sourced from Theni, Salem and other specific locations and available as pale triangular blocks. This fresh soft jaggery added makes the mittai melt in one’s mouth. The water that is added to prepare the mittai is from the river Tampirani (Thambirabarani) which has a unique taste.

After the groundnuts are shelled and roasted in a machine, it is then combined into the jaggery syrup. This preparation is made over a wood fire and this use of veragu aduppu (firewood) lends a beautiful aroma and taste to this mittai. This mittai is then rolled out before being cut into rectangular pieces. Sometimes cardamom and dry ginger are also added. Another popular variation is the topping of grated coconut in hues of pink, green and yellow on the mittai. 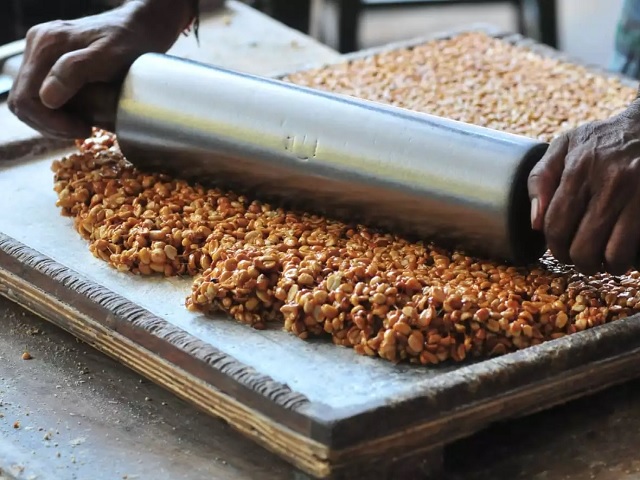 The medicinal properties of this mittai are very well-known for it is deemed to be a rich source of protein, vitamins, minerals and nutrients. This innovative preparation in Kovilpatti region in Thoothukudi district of Tamil Nadu received the Geographical Indication Tag (GI) in 2020.

One thought on “Kovilpatti Kadalai Mittai of Tamil Nadu”