The ancient city of Ujjain or Ujjayini as it was known is steeped in history, culture, art, music and  literature. This heritage city is home to some of the greatest writers ever to have walked this earth.

One of those literary geniuses is Raja Bharthari, an eminent scholar of religion and ethics. Raja Bharthari was the son of Maharaja Gandharvasen and step-brother of the great Vikramaditya and ascended the throne after his father as he was older.

There are many interesting stories about the asceticism of Raja Bharthari. Legend has it that Raja Bharthari already had two wives but became enamoured with the beautiful Pingala and married her. Once on a hunting expedition, Raja Bharthari filled with love and pride for his beautiful wife Pingala who had accompanied him shot at a deer killing it instantaneously.

When he climbed out to examine his prize, the pious Guru Gorakhnath appeared. Seeing the dead deer, Guru Gorakhnath overcome with sympathy and love asked Raja Bharthari, “When you cannot resurrect a being of God, what right do have to take its life?”

Raja Bharthari overcome with remorse remained silent. Then folding his hands, “Maharaja! If you can bring this deer to life, I will surrender myself to you.” Guru Gorakhnath was a divine being and using this tapobalam (strength of his penance and austerity) revived the deer that shot off into the forest immediately. Raja Bharthari bound to his word was now in a quandary – how to leave his beloved Pingala but also how to go against the promise made to Guru Gorakhnath? Guru Gorakhnath read the mind of Raja Bharthari and gave him a fruit and said, “O King! I offer this fruit to you which when partaken will always keep you young and youthful.”

Raja Bharthari expressed his pleasure at receiving this divine fruit and decided to give the fruit to his lovely Pingala for he wished her to always remain beautiful. Now, Pingala had her heart set on the Kotwal (Chief guard) of the kingdom which Raja Bharthari was unaware of. Pingala decided to give the fruit to the Kotwal thinking that he will continue to fulfil her sexual desires for a long time.

But unknown to Pingala, the Kotwal was in love with a prostitute and gave the fruit to her thinking that his wants and needs will be fulfilled by her. The prostitute thought that if she were to eat this fruit, the hellish existence that she lived in would haunt her forever and thought that the king is the most deserving contender for the miraculous fruit as he would take care of all his subjects for a long time.

Thinking thus, the prostitute sought an audience with Raja Bharthari and surrendered the fruit to him. Raja Bharthari was bewildered and asked her how she came into possession of the fruit. Once the mystery was unravelled, Raja Bharthari realizing the betrayal of his wife developed vairagya (dispassion) at once and handed over his entire kingdom to Vikramaditya.

He went away to do penance in a cave on the banks of the holy Kshipra river and it was here that the great king turned ascetic sat for tapaha (penance and austerity) for 12 years. Seeing the shakti (energy) of his tapas (penance), it is said that Indra, king of the Devas became fearful suspecting Raja Bharthari of wanting to snatch his title and kingdom. It is believed that Indra used his thunderbolt to strike the cave where Raja Bharthari was meditating causing the stone to fall. Raja Bharthari using his tapobalam (strength of his penance and austerity) held the stone in his hand and even today the indelible mark of his hand is seen above his statue in the cave! At the end of the 12 years of penance, Raja Bharthari had the darshan of Lord Vishnu and urged his nephew Shree Gopichand to seek the blessings of Lord Neelakanteshwar. Shree Gopichand’s cave is adjacent to Raja Bharthari’s cave.

The sacrosanct cave is near the Gadkalika temple. The height of the cave is very low and air movement is quite poor which makes one wonder how such a tall and strong person like Raja Bharthari sat in this cave for 12 years! At the end of the cave is the statue of Raja Bharthari and near the statue if looked carefully, is another cave that is believed to be the way to the Char Daams from here. The Shiva Linga can be seen inside a depressed site and locals say that the temple in the cave is above his samadhi (resting place). There is a dhuni in front of his statue whose ashes are always hot. 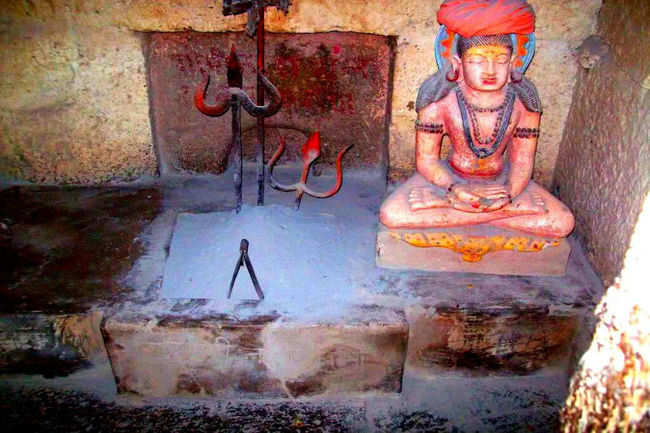 Thousands of devotees visit these caves each year to seek the blessings of the great saint Bhartharinath and have darshan of the dhuni and apply the vibhuti (ashes) that they believe can fulfil their dreams, solve their problems and cure fatal diseases.